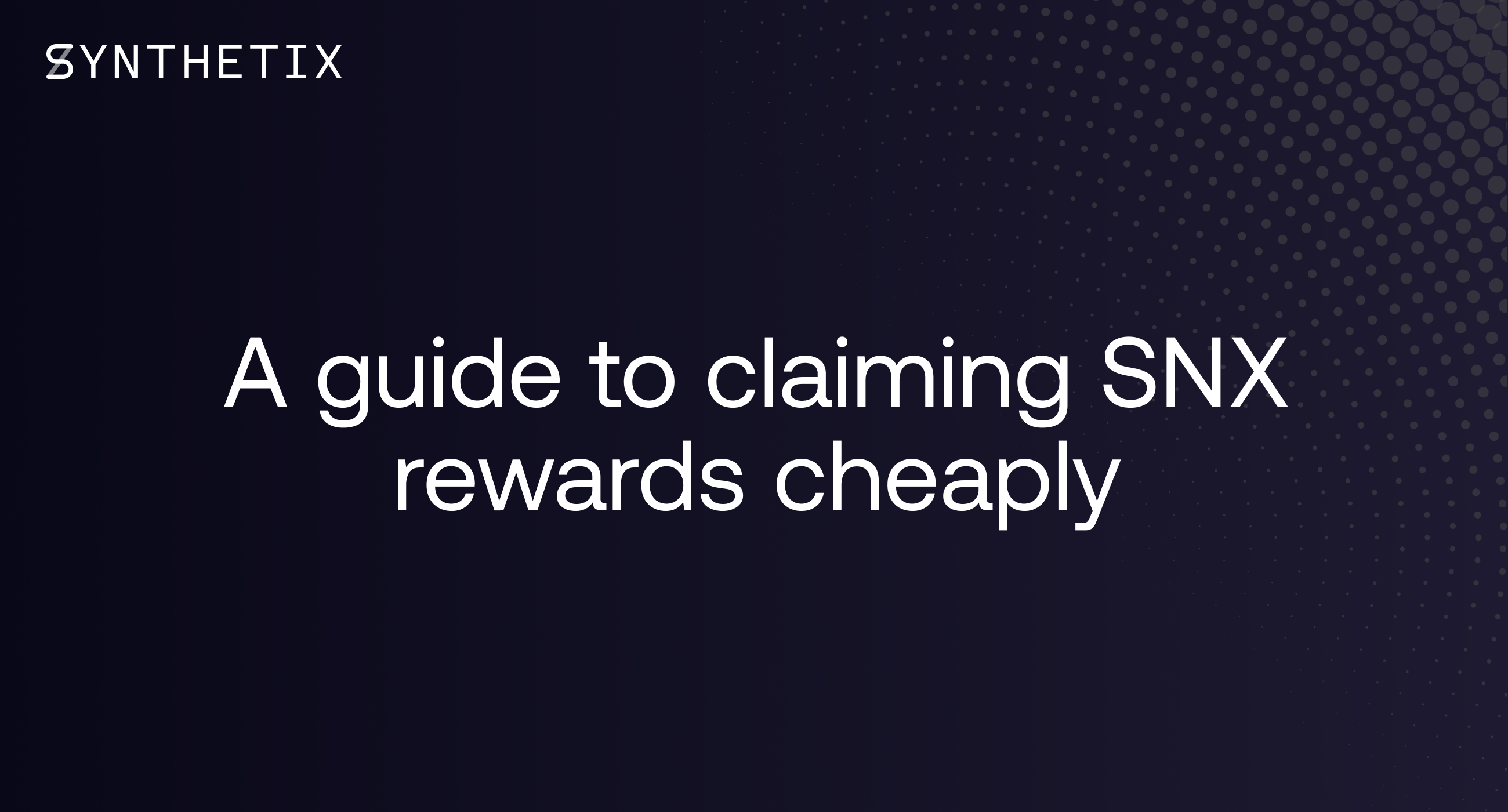 If you’re staking SNX, you’ve probably noticed that gas prices have been extremely high recently. We’ve written this article to explain how gas works, why prices can be higher for Synthetix transactions compared to other protocols, and the details for a strategy known as “The Clinton Method” for claiming SNX staking rewards as cheaply as possible.

Gas on Ethereum accounts for two separate components: computation and demand. To pay gas for a transaction, you essentially need to pay a certain gas fee (gas limits, based on computation) and then multiply it (GWEI, based on demand).

If you’re staking SNX, when it comes to thinking about gas there are a few things to consider. The first thing is that you have all week to claim rewards between fee periods (which open/close at 10am Wednesday, UTC). This means that if at any time during the week you notice that GWEI demand is relatively low, you can take that opportunity to adjust your C-Ratio and claim your staking rewards. The best way to keep track of current GWEI demand is at ethgasstation.info or using this nifty Chrome extension which uses Eth Gas Station to display the current standard GWEI.

The second thing is that as we’ve already discussed, there’s what is essentially a flat gas rate for claiming rewards (subject to demand/GWEI). In other words, due to the way Ethereum is designed, it costs the same someone with 10 SNX to claim rewards as another person with 1,000,000 SNX. This means that for certain low numbers of SNX, and depending on gas prices, it may not yet be worth staking your SNX to try to gain a yield. People in the Synthetix Discord community have suggested 500 SNX might be the threshold below which you might want to reconsider staking, but it’s up to every SNX holder to make their own decision. If you have SNX and want to do something other than stake it as collateral, you can always lend it out on AAVE or Uniswap.

The third thing to consider is skipping claiming rewards in certain weeks, particularly if the rewards you’re claiming are lower than the gas it would cost to claim them. These rewards will then be put back into the reward pool to be distributed again between SNX stakers in the next fee period.

Clinton, a Synthetix Core Contributor, uses this method to claim rewards as cheaply as possible. It aims to get the reward-claiming process started early in the fee period, but set at a lower GWEI than the current demand so it can be waiting all week to be executed. And, by using a delegated wallet, the mint/burn/claim transactions can be pending all week without blocking your primary staking wallet from doing any other transactions.