The Maker Protocol is a complicated system with many moving parts and purposes. Anyone can gain the benefits of using Maker’s popular stablecoin, Dai. The transparency of the blockchain means there’s a wealth of data just waiting for users to explore.

To examine that data all in one place, there’s no better resource than daistats.com, an independent creation of Maker’s Head of Smart Contracts, Mariano Conti. By collating the most important Dai metrics on one web page, Conti has made it extremely easy for users to delve into the data that offers the most valuable insights about the health and vibrancy of the Maker Protocol. While much of daistats.com is self-explanatory, there’s also plenty of Maker- and crypto-specific terminology that will excite experienced Dai users and crypto nerds, but perhaps trip-up newbies.

The following guide to daistats.com unpacks every Protocol metric on the page and explores the broader significance of each number.

Total Dai is the entire Dai supply—the total liquidity available in the system for users, traders, and savers. It’s also a good indication of the soundness of the Maker Protocol. As the Maker ecosystem gains traction, Dai adoption increases and more people understand the value of Dai to the decentralized finance (DeFi) movement.

Total Sai is the amount of unmigrated Single-Collateral Dai (SCD), the first generation of Dai, still in existence. As explained in this blog post, anyone still holding Sai can migrate their assets to Dai to take advantage of all Dai offers, including the Dai Savings Rate. Dai + Sai is the total stablecoin supply of the Dai ecosystem.

IMPORTANT: On April 6,  the community signaled its support to initiate the shutdown of the SCD system through an executive vote on April 24th, 2020. Therefore, Sai holders should take this into account and consider migrating to Dai as soon as possible.

All Dai in existence originates from one of four sources:

In addition to these sources, there is also System Debt, which is Dai that is expected to be recovered from Vaults that have been liquidated due to lack of sufficient collateral. Recovery happens via a Collateral Auction, which begins as soon a Vault is liquidated but takes around 6.5 days to conclude. No System Debt should be more than 48 hours old. 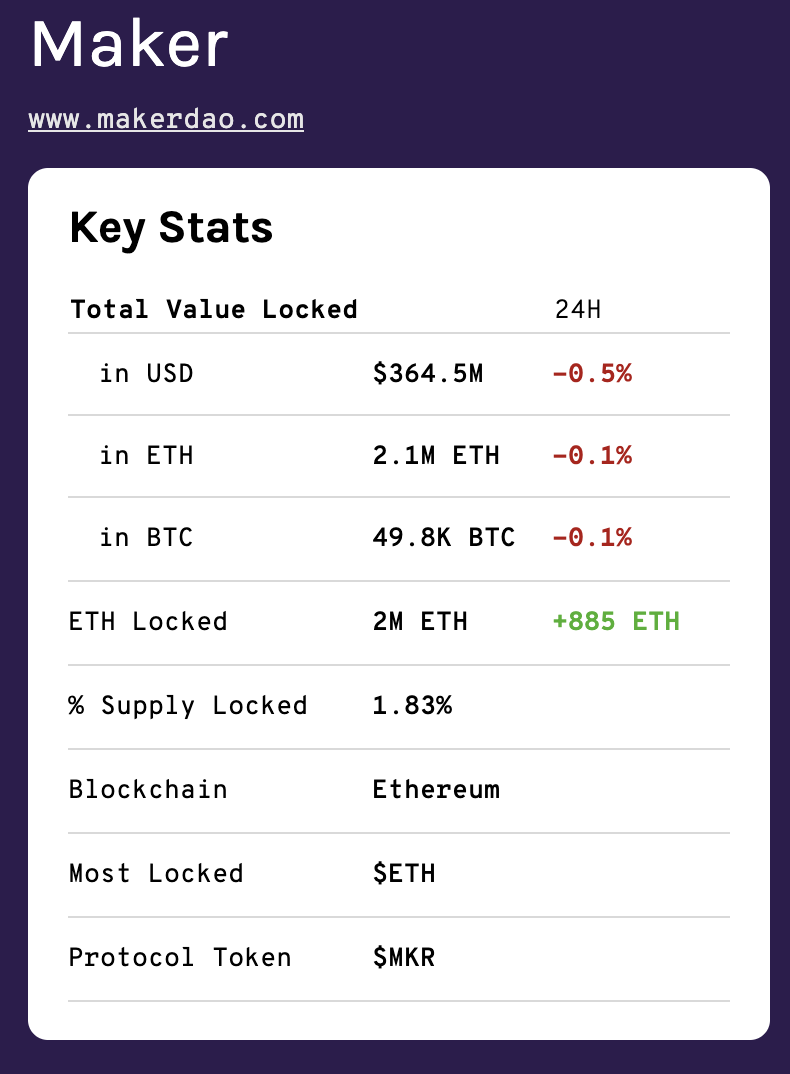 ETH Locked (in ETH) shows how much Ether collateral is being used to generate Dai. Since ETH is the most used type of collateral, and Maker is the largest DeFi protocol by Total Value Locked, this is a reasonable proxy for the size and growth of the overall DeFi sector. ETH Ceiling (in Dai) is the maximum amount of Dai that the system allows to be generated against ETH collateral, and ETH Stability Fee is a variable-rate fee that continuously accrues on outstanding Dai generated against ETH in Vaults.

What’s true for Vaults collateralized with ETH is also true for Vaults collateralized with BAT and USDC. BAT Locked (in BAT) and BAT Ceiling (in Dai) shows how much BAT is currently used as collateral and the maximum amount of Dai that can be generated against that BAT collateral, respectively. BAT Stability Fee is a variable-rate fee that continuously accrues on outstanding Dai generated against BAT in Vaults. USDC Locked (in USDC), USDC Ceiling (in Dai), and USDC Stability Fee provide corresponding figures for USDC.

Dai (ERC20) Supply is the amount of Dai in free circulation; that is, Dai not locked in Vaults or the DSR. This is Dai that is held in wallets, on exchanges, and so on.

Collateralization Ratio is the total value of system-accepted collateral (currently ETH, BAT, and USDC) vs the amount of Dai issued against it. While users must maintain a minimum ratio of 150%, as dictated by Maker governance, most maintain a ratio much higher. Vaults that fall below the 150% ratio are liquidated and their collateral auctioned to try to cover the outstanding Dai.

DAI Price, ETH Price, BAT Price, and MKR Price reflect the current average price of each token. Each price is derived from the Oracle Security Module’s decentralized feed, which pulls price information from multiple sources. Built into the OSM is a one-hour price delay, which helps protect the system from an attack on the Oracles and other risks. The USDC Price is deemed to always be $1; therefore, a fixed Oracle reports “1.”

Dai Savings Rate is a variable rate of accrual earned by locking Dai in the DSR smart contract.  The DSR is set by MKR token holders, who vote through a process of decentralized governance. Last Drip shows when returns were last paid for Dai held in DSR. Drips happen frequently, so users can watch their Dai generate returns minute-by-minute!

Debt Available to Heal (Dai) is System Debt (see above) available to reduce (heal). The debt healing process is routinely run by Keepers (human or automated participants in auctions) when a Collateral Auction fails to cover the debt from a liquidated Vault (either because the price of the collateral dropped too fast or because no one wanted to buy it). If there is insufficient surplus to cover the debt, then a Debt Auction is triggered. That action programmatically mints and auctions MKR, the governance token of the Maker Protocol in lots in exchange for DAI. The funds raised through bidding are used to cover outstanding bad debt. The auction increases the total supply of MKR, diluting existing owners’ holdings.

System Surplus (Dai) is Dai generated from system fees, including Stability Fees levied on Vaults and Liquidation Penalties. The Liquidation Penalty, set by Maker governance, is currently a fee equaling 13% of the total collateral the Vault holds at the point of liquidation.

The Dai Surplus (Flap) Auctions metric is the number of Dai surplus auctions ever held. Since surplus auctions are held for lots of 10,000 Dai, Till next Flap Possible shows how much more Dai must be accrued before 10,000 is reached and the next auction, or ‘flap,’ can begin.

Vaults Opened shows the number of Vaults ever created to generate Dai against all currently accepted types of collateral.

BAT Vault Auctions and ETH Vault Auctions each show the number of auctions that have taken place (due to liquidations, as explained above) since the launch of Multi-Collateral Dai.

MKR Supply is the total amount of MKR currently in existence. MKR in Burner is the total amount of MKR currently ready to be burned. For a small transaction fee, anyone can burn MKR directly from daistats.com using a MetaMask wallet. Burning reduces the amount of MKR in existence, theoretically increasing long-term net demand on the market. This incentives the community to hold MKR and, hopefully, vote with it to maintain the decentralized governance of the Protocol.

Annual MKR Burn Rate is an estimation of the amount of MKR likely to be burned in a year. The total USD equivalent below that number is based on the current price of MKR, the Stability Fee, and the amount of Dai in existence. Of course, those figures change all the time, so the Annual Burn Rate is just a snapshot of the current situation.

Total Chai. Chai is a community-created wrapper for Dai that enables Dai holders to earn the DSR on their Dai and use those funds at the same time. The Chai smart contract locks a user’s Dai in the DSR and provides Chai tokens in return. That Chai can be transferred and traded freely, and then swapped back for Dai (and any returns generated) at any time. Dai brewing is the Dai swapped for Chai that is accruing returns.

For example, let’s say a user converts 100 Dai to Chai, and 1 Chai is worth 1 Dai and the DSR is 8%. That user receives 100 Chai while the Dai locked in this process ‘brews’ and generates returns based on the DSR. After one year, that user will have a total of 108 Dai locked in the Chai contract. Each Chai should then be worth $1.08.

Dai in Uniswap. The amount of Dai available for exchange in Uniswap, a popular platform for decentralized cryptocurrency trading.

Learn Even More About Maker

Now that you’ve read this guide to Dai stats, discover Oasis.app, a user interface created by the Maker Foundation. You can use Oasis to generate Dai, earn on the Dai you hold, and trade tokens—all in one place.

The post A Guide to Dai Stats appeared first on The Maker Blog.