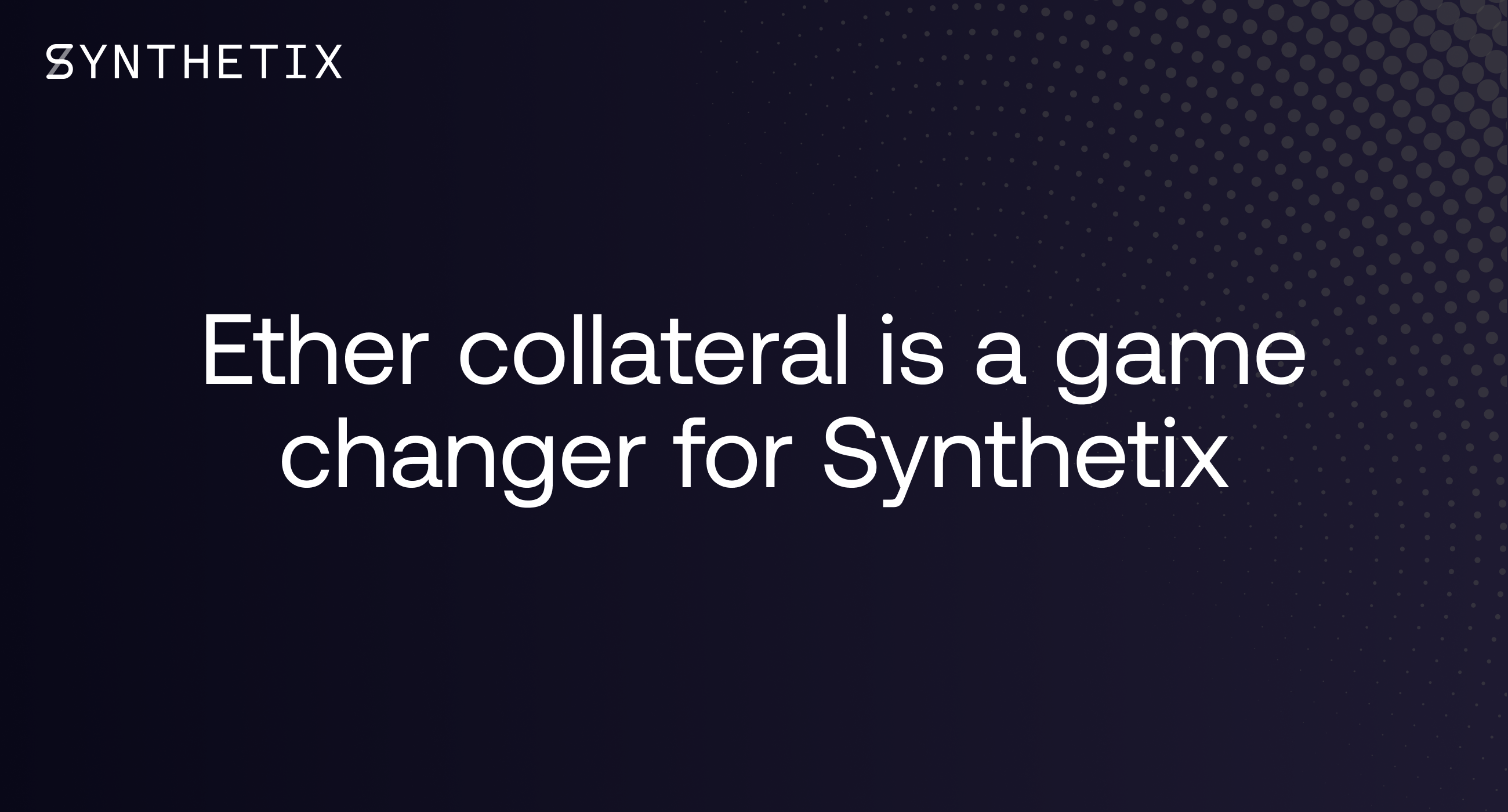 In the Achernar release, we’re introducing Ether as an alternative form of collateral in Synthetix. It’s a major piece of new functionality, so we’re launching with a three month trial period to observe demand and user engagement. This post will outline the benefits of the change, as well as how it works. You can read Sigma Prime’s audit report for Ether collateral here.

Update (2020-02-20): we have decided to lower the total ETH cap for Ether collateral from 5000 to 1500 ETH as we trial the launch. We will monitor the launch and raise it when the team is comfortable doing so.

Why Ether as collateral?

Beyond the fact that many people in the Ethereum community asked for ETH to be introduced as collateral, there are many positive implications for adding it to the system. Firstly, it makes it easier for a newcomer to start trading on Synthetix.Exchange. If they have ETH, they can try it out without selling their ETH for Synths.

Adding Ether as collateral also contributes to the Synth supply, and thus trading fees, while diversifying the collateral. This increases the system’s scalability while also protecting it from potential SNX price shocks, without diluting the value of SNX. This was an understandable concern from SNX stakers once the community began discussing adding ETH — that it would need to be implemented in a way that didn’t dilute the value of SNX. in this model, ETH stakers don’t receive fees or rewards as they take no risk for the debt pool.

One other interesting implication is that it could have a positive effect on the sETH liquidity pool on Uniswap. At the moment, many LP’s are SNX stakers, who are providing the sETH they’ve minted through staking their SNX. In doing so, they’re sacrificing the liquidity of their Synth position in case of major market fluctuations. For example, if BTC pumps while you’re holding sETH you minted by staking SNX, your portion of the debt pool is exposed to that gain while you stay stuck in sETH. If the ETH stakers contribute to the liquidity pool instead, they take on less risk, as their debt will not fluctuate — they’ll be receiving the SNX rewards for sETH LP’s with less risk than SNX stakers. Of course, we’ll need to wait and see what actually happens once it’s live.

There will be a three month trial period for ETH collateral, with a planned initial total cap of 1500 ETH (it may then be increased after launch). The collateral requirement will be 150%, with a minting fee of 50bps (0.5%) and an interest rate of 5% APR. The collateralisation process will be executed through Synthetix.Exchange’s interface.

By locking collateral, ETH stakers will create a debt they need to repay if they want to withdraw their ETH and leave the system. This is similar to the debt that SNX stakers create when they lock their SNX as collateral, but the difference is that ETH stakers will not take on risk of debt pool fluctuations. In other words, ETH stakers are not participating in the ‘pooled debt’ aspect of the system — their debt will be denominated in ETH, and will be the same when they leave as when they enter.

For example, if Alice locks 150 ETH as collateral, she can borrow 100 sETH. Even if she uses that sETH to make a series of trades that allow her to increase that 100 sETH to 200 sETH, she only needs to pay back 100 sETH to unstake her 150 ETH. That profit is instead added to the SNX stakers’ pooled debt (see page 2 of the litepaper for more details). Of course, because they do not take on the same risk as SNX stakers, ETH stakers do not receive sUSD trading fees or SNX staking rewards.

The final few details you should know are that the minting fee and interest rate paid by ETH stakers is also paid to SNX stakers and the minimum position size is 1 ETH. At the end of the three month trial period, all outstanding loans must be paid back. There will be a one week grace period, after which anyone will be able to send sETH to close the position and claim the outstanding ETH.

The Synthetix team is extremely excited to launch Ether collateral — it’s a major step for the protocol that should increase trading volume as well as make it more secure against price shocks. For more information about how it works, you can check out the original SIP outlining the process. Otherwise, you can come join us in Discord!